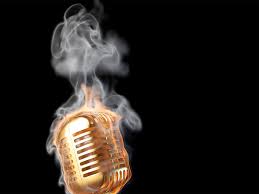 Did you enjoy yourself at Word! at the Writers' Festival? Do you want to see more live poetry performances? Are you curious about performing poetry yourself live in front of people? If so, think about checking out Cafe Deux Soleils every fourth Monday for the Youth Poetry Slam.

In other news... HEADLINES AND SIDELINES has been tweaked for 2016-2017 to include beat correspondents (people that are assigned to cover certain areas of the world/issues. Those students not assigned to a 'beat' will continue to provide ONE "headline" news item written in their own words answering the journalistic "5 Ws" and ONE "human interest or otherwise amusing" news item, also in your own words. A short paragraph for each will suffice.

ROmeo and Juliet: The Capulet Ball

The 6th bi-annual Great Southern Cook-off took place on May 8 and 9. This was a great way for our students to learn more about the American South and wrap up our To Kill a Mockingbird unit. Students researched traditional dishes from the southern US and then prepared them for a fun competition. Winners will be announced soon....

The Re-trial of louis riel

Martyr? Hero? Traitor? Mentally Unstable? Father of Confederation? All these could apply to one of the most controversial figures from Canadian history. Recently, our classes put Riel on trial again for high treason for his role in the Northwest Rebellion. Each member of the class researched a character from the drama of history and in the end our jurors returned two different verdicts: Block 1-2 returned a verdict of guilty and 1-1 returned a verdict of not-guilty! We would like to thank Kinji Bourchier who spent the morning with our legal teams getting them ready for trial!

In late November, our classes assumed the role of British colonies attending the Quebec Conference where they rigorously debated the division of powers in the new confederation. Participation marks were on the line in this pressure-cooker simulation!

The Tragically Hip: A Classroom Celebration

Continuing on the celebration of Gordon Downie and the Tragically Hip, in September, the Humanities classes created a original compositions and poetry based on a song title prompt of a Hip song. Here are some examples...
a short story by Lyndsey B prompted by Escape is at Hand for the Traveling Man
a short story by Jane W prompted by Three Pistols
a short story by Helena Q prompted by Looking for a Place to Happen
​​
Powered by